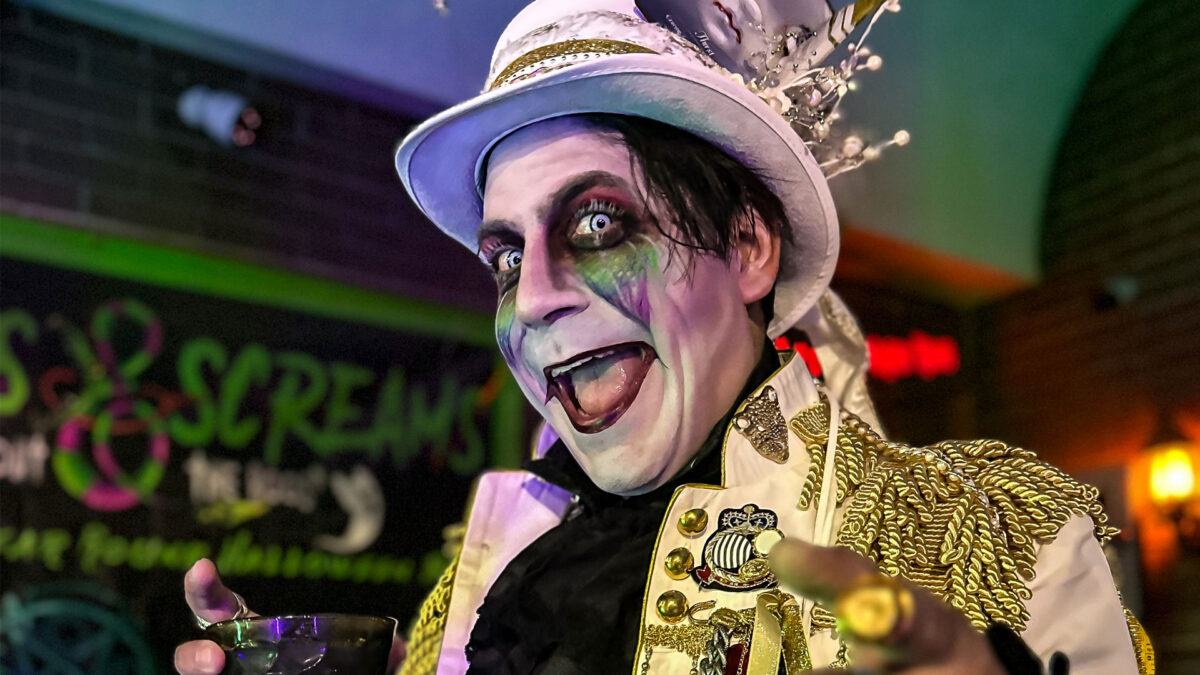 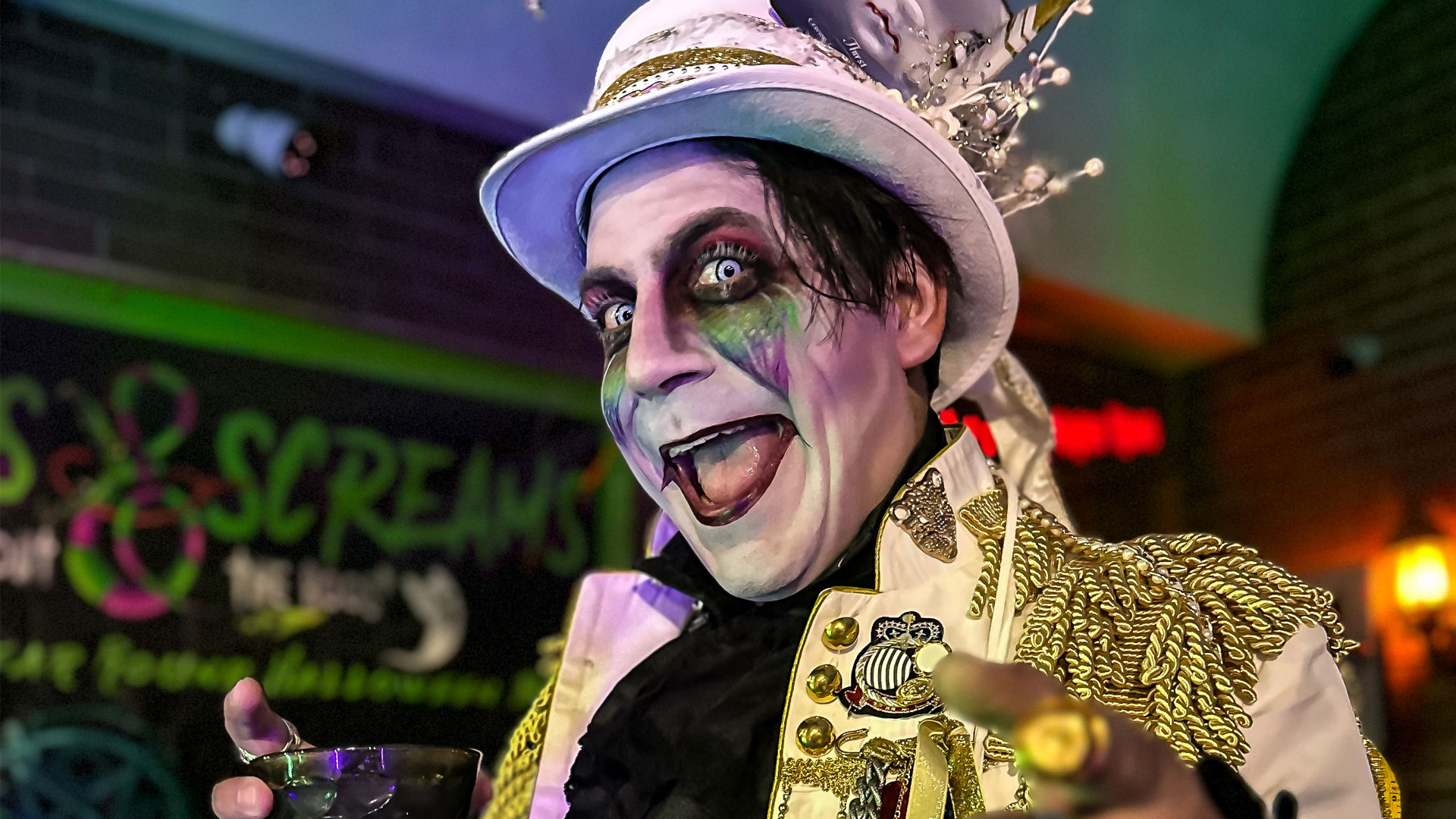 What started in 2017 as an idea, played itself into a Halloween themed bar. Cocktails and Screams opened up the downtown market to a new demographic, something Morrone intends to continue to create through seven more themed bars.

Morrone moved to the city in 2001 from Upstate New York. Like most transplants, he loves the weather, especially thinking back to the dark winters he endured in New York.

“New York is a very depressing area in the winter!” Morrone said. “I was like ‘I didn’t have to shovel snow, I don’t have to deal with the slush and the sleet, my car doesn’t have to rust - I’m staying!’”

After surviving his first year, not without the help of A/C, his blood thinned, and he fell in love with the city. Morrone said he’s never going back to New York, and wouldn’t rather live anywhere else.

He followed his Telecommunications job down, but creating is his passion. Morrone still works as an IT Director for United Cerebral Palsy during the day. After work, he shifts into bar-mode, working another full-time job managing and creating his bar locations.

Here in Orlando, he met his wife Addie Hassel.

Hassel, who also owned Joysticks (an 80's themed arcade bar), has worked on a number of fabrication projects at Disney and Universal. She played a large part in the construction of Universal’s Harry Potter themed areas.

Both Morrone and Hassel share a love for Halloween Horror Nights, and they both wanted to make a place that would scratch their horror itch all year. 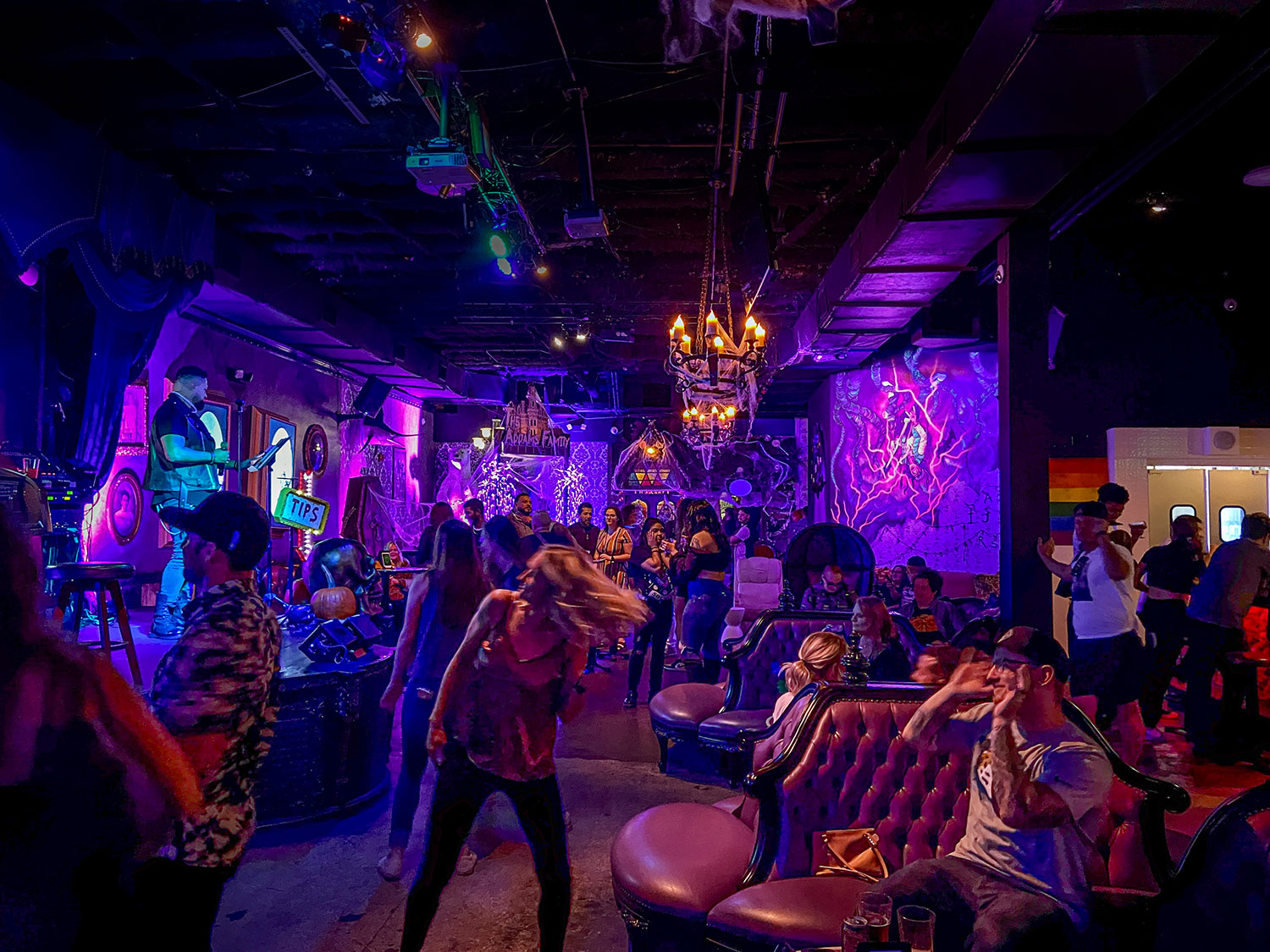 When building out the bar Morrone and Hassle knew they had to “drunk proof” the place. With alcohol free-flowing and people dancing, the place couldn’t have anything breakable. With much of the decoration made in-house, Morrone wanted to build things he liked, hoping others would enjoy it too.

"When you’re in Disney, you see all the amazing things they create, but you can’t touch them. Our goal was to make something that was immersive, like Disney, but you could actually interact with the things.” - James Morrone

After a year of design, permits and a self described “labor of love”, the bar opened it’s doors in October 2018. There was nothing like it. It filled a gap that was missing Downtown.

Eventually, the bar started to gain a reputation. Word of mouth spread like wildfire. The bar went viral on TikTok a few times, amassing almost 37,000 followers on the site and 281k likes. One of their videos even has over a million views.

Luna Moon, one of Cocktail and Screams’ entertainers loves Halloween. She moved to Orlando hoping to work at the bar, but they beat her to it, offering her a position.

“It means everything to me,” Moon said on Halloween.

For her, the holiday always brought people together. She herself is a public figure in the realm of Halloween/Horror social media, amassing a following of 129k on Instagram. 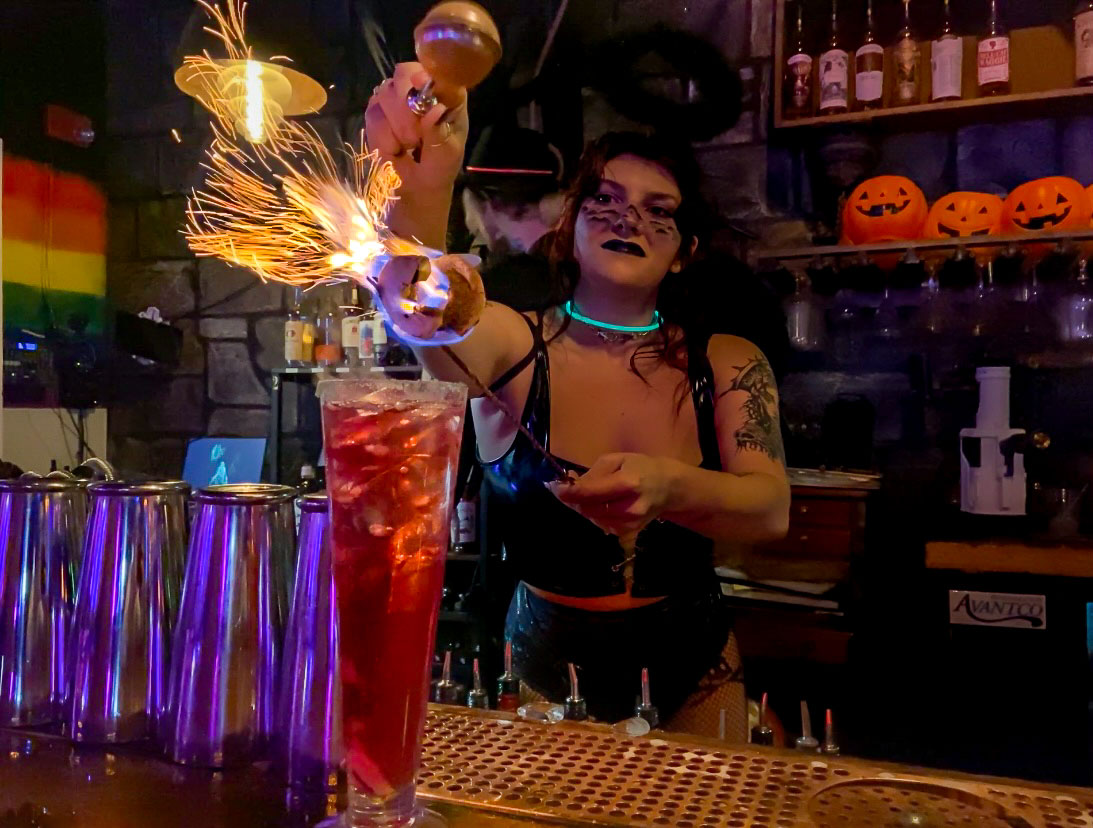 Even with their success, they hit a roadblock in the form of a pandemic.

Morrone and Hassel charged on, targeting more bars. Hassel took a more creative approach while Morrone dove into both the creative and operational side. 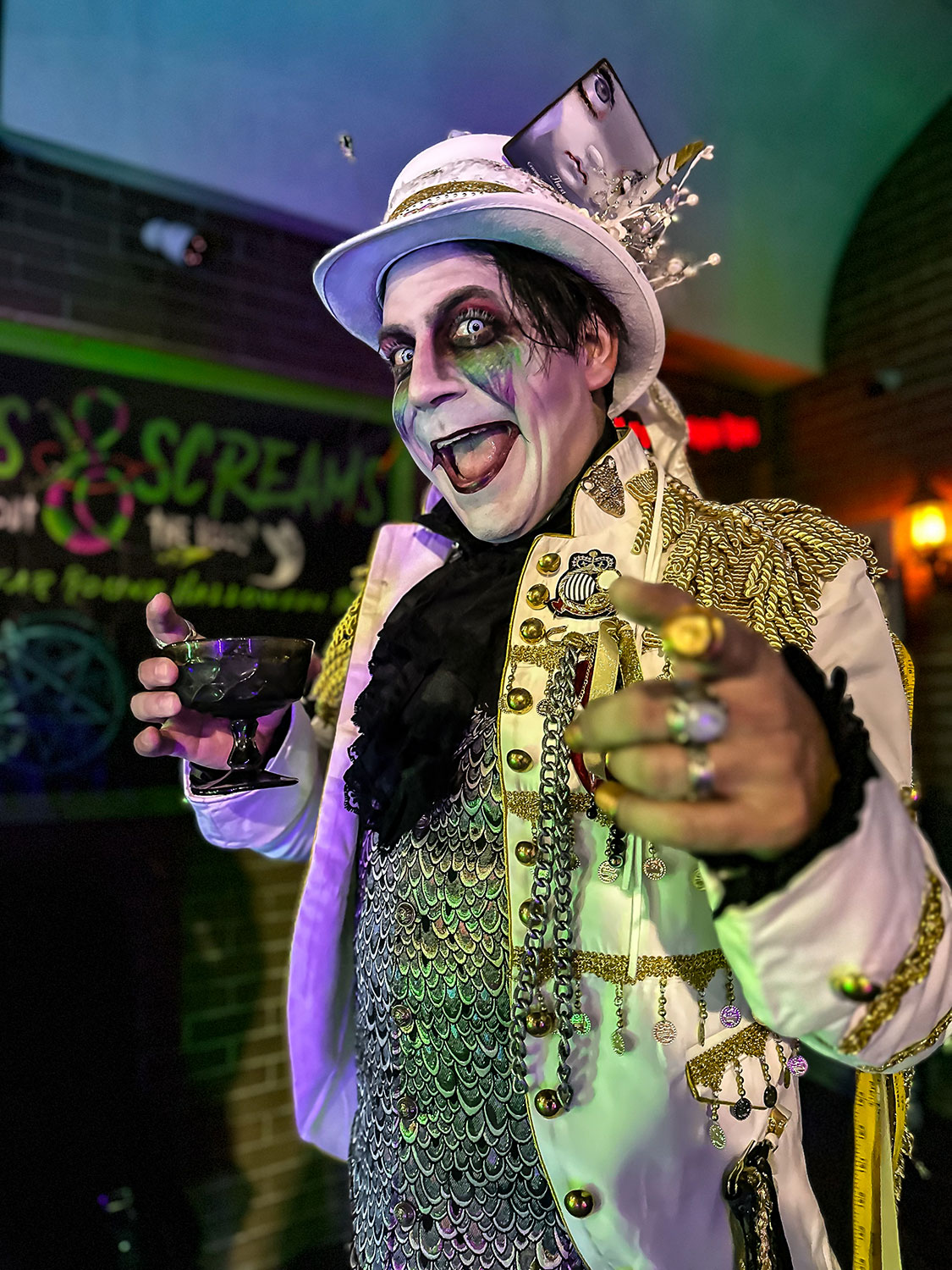 Morrone loves meeting the people who visit his bar. He even met someone from Scotland who told him the bar played a big influence in their trip to Orlando. Over the weekends, you can find Morrone wandering around Cocktails and Screams incognito as the Mad Hatter. This gives him a chance to talk with people, gauging their reactions.

Morrone originally designed the bar for self expressed nerds and cosplayers. He wanted to open a place where anyone could feel they belonged.

“90% of the fun is building,” he said. “The other 10% is sitting back and watching people enjoy what you've created.”

The Most Rewarding Part of his Journey

His wife had discussed people who used to walk into Joysticks and cry, something Marrone never believed. It was a running joke between the two, until he saw people crying while visiting Cocktails and Screams.

“You can feel the emotion when people walk in,” he said. “They say: ‘Thank you for building this for us. We feel like we’re at home.’”

Morrone says it’s the most rewarding part for him.

“Making money is great, but the joy comes from looking at people, watching them have a good time,” he said

He is also proud of the environment they’ve created, a place where no one has to be afraid to be themselves. A place where you can dress up any night of the year and get 10% off. A place where anyone can have fun without judgment.

“There’s not enough happiness in life,” he said. “I feel like we give people a little bit of that.”

Regulars come in every night, always dressed up, just to hang out. People even make new friends at the bar, united by their love of Halloween. Morrone has even hired some of his regulars.

One couple he knows lives in Tampa and attended the bar’s opening party in 2018. They still come 20-30 times a year, driving the hour.

“It’s kind of like we’re a family with some of these guys. We know them so well,” Morrone said.

As for Downtown Orlando, Morrone has seen a shift during his time living in the city.

“Downtown goes through that cycle - that ups and downs,” he said. “I feel like we’re in the upswing now.”

In 2001, he noticed the streets were so packed you couldn’t walk. The sea of people slowly left, leaving a ghost town. Especially after the pandemic, he’s seen them back.

Not only has Downtown grown, but Morrone thinks it also grew up. The older scene had moved to suburbs, but they’ve come back and brought a trend of more high quality bars. These bars see more theming.

“We’re trying to bring a little bit of Disney to Downtown,” said Morrone. “We’re getting a lot of the tourists who don’t normally come downtown, to come downtown!”

Morrone thinks he’s been successful doing this, especially with Cocktails and Screams. He can list 15-20 countries that he’s seen visitors from.

“I know they’re coming to Disney and making sure that we are a stop,” said Morrone. “It is bringing that traffic, I hope the city sees it as bringing the dollars in the city.”

For Morrone, the Orlando life is built on three words: laid back, diverse and fun. He enjoys how the city is a lot slower than New York and a lot of fun. He also loves how nice everyone is.

“One of the first things I noticed was ‘why are these people so friendly?,” he said. “When I moved here, I couldn’t believe how friendly everyone was.” 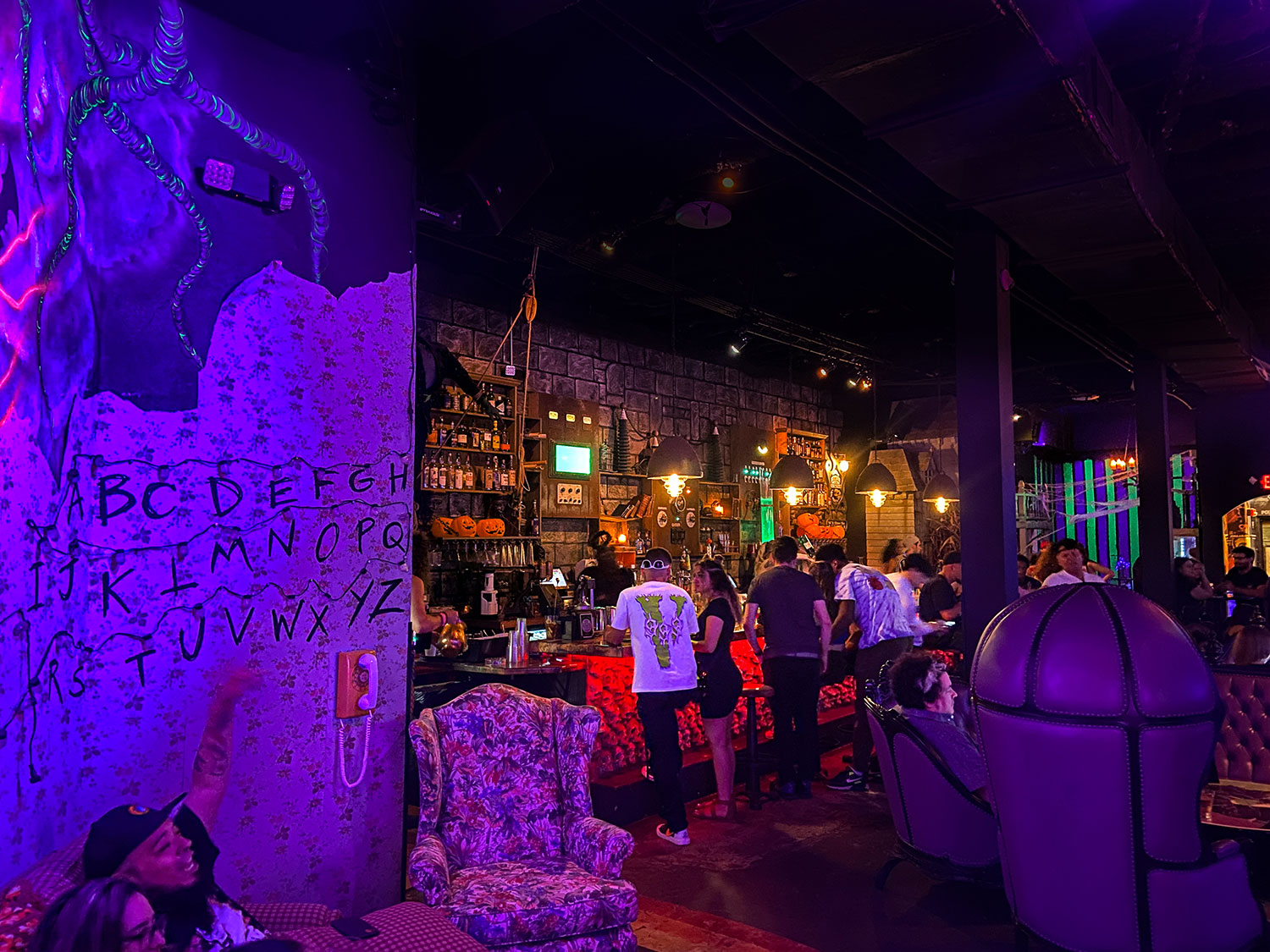 Cocktails and Screams is the perfect place if you’re already missing Halloween. If you do visit, be sure to check out the speakeasy in back. A costumed character will craft a unique “potion” for you in this darker side of the bar. 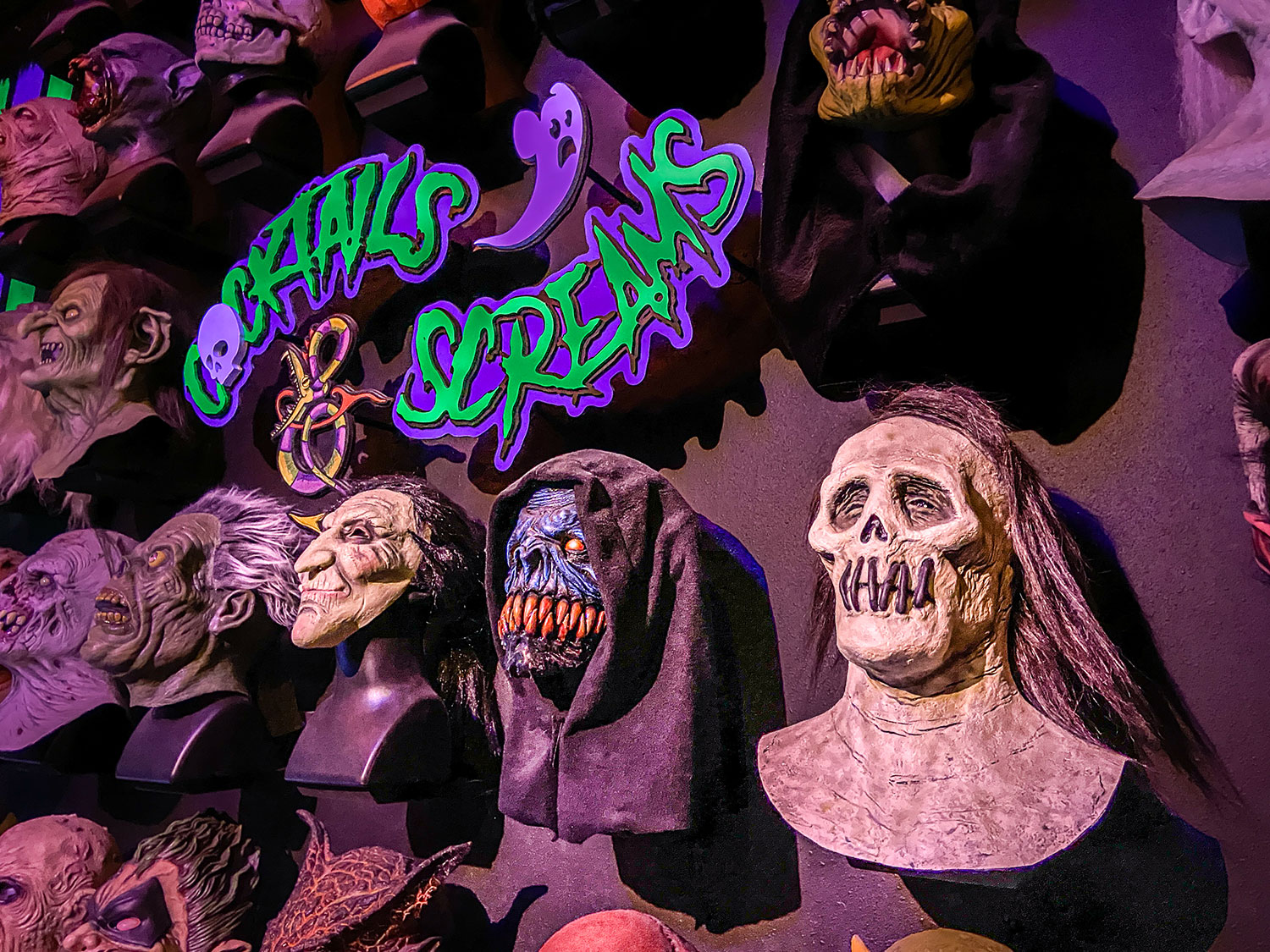 I am a senior at the University of Central Florida currently studying journalism and hospitality management. I love traveling, especially seeing new things and meeting new people. One of the most important lessons I’ve learned is that traveling doesn’t require a trek across the world. One thing I love about Orlando is the natural beauty surrounding the city. From the ocean, pine forests and swamps, this area is unlike anything else in the world!