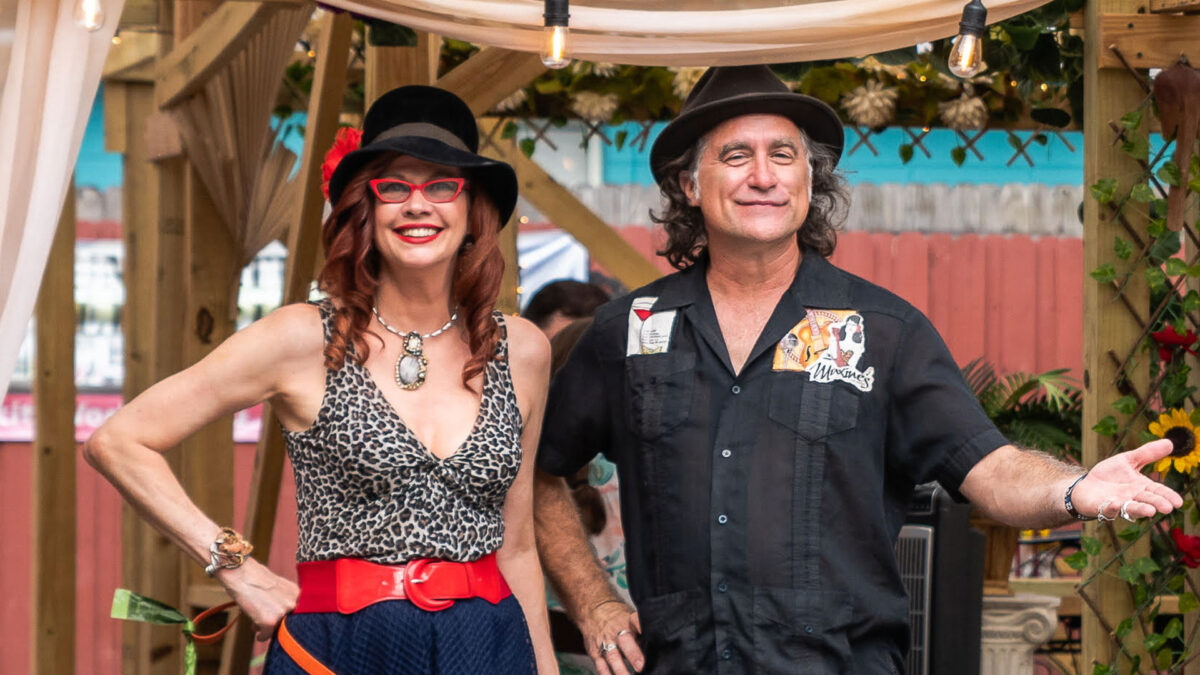 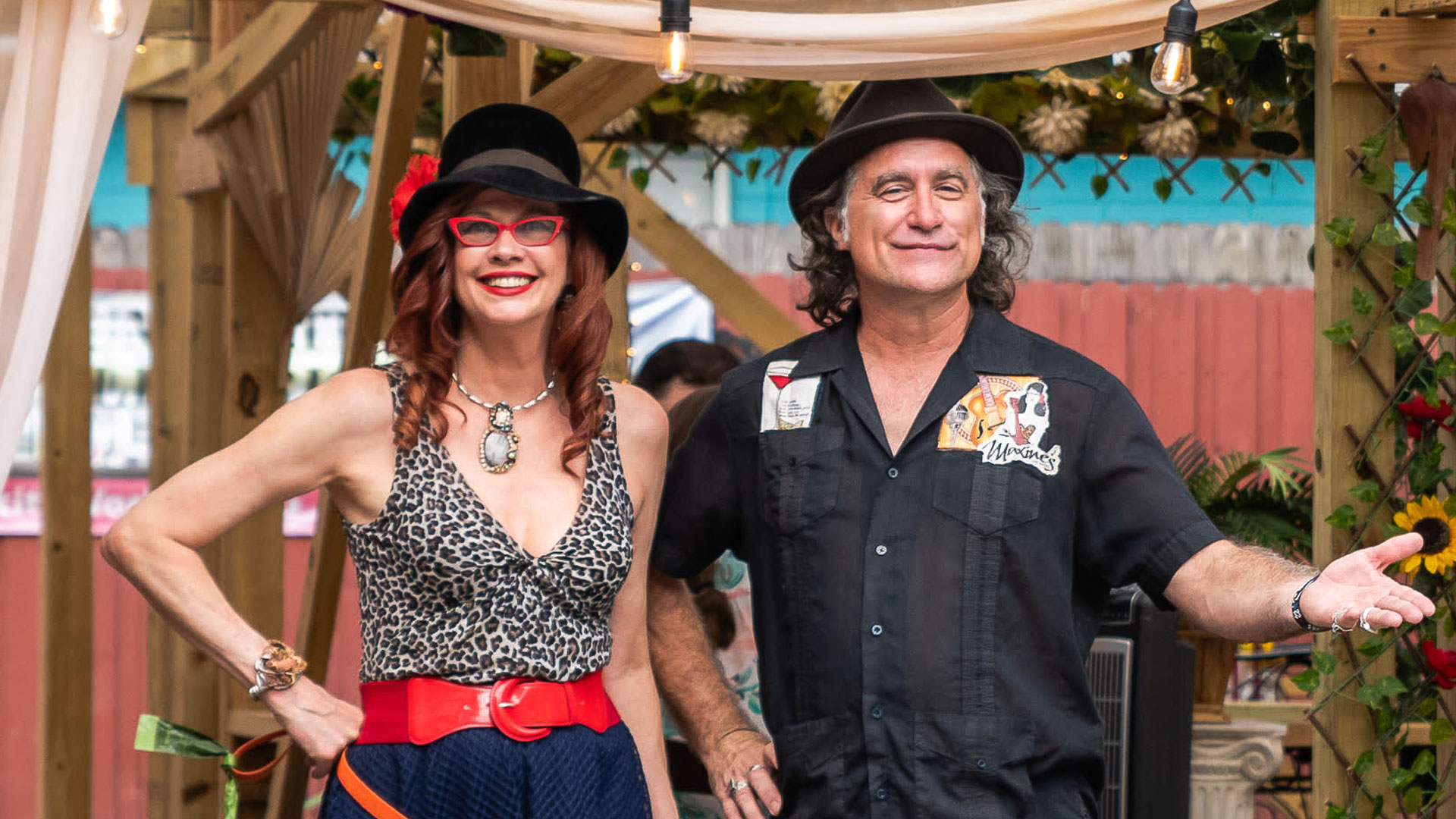 Maxine Earhart has never loved the restaurant business. Before diving into the craziness of the industry, she worked in design, creating draperies and pillows for model homes. Restaurants, to her dismay, are the opposite of the quiet world of design. What’s kept her in? Her love for her husband, Kirt Earhart and her guests who visit Maxine’s on Shine. The restaurant is a labor of love for the pair.

“I would’ve given up years ago,” Earhart said. “It was my husband’s football-quarterback mentality [he was the quarterback of his high school’s team] that said ‘No, we got this. We can do it!’”

In 2015, they got married at the restaurant. Eight years coming, the ceremony utilized the on-site chapel, built during the building’s residency of a 60’s-era wedding venue. For a decade, people who couldn’t get married at a real church would be married at the site.

“The secret ingredient is that we’re best friends,” she said. “We really like each other, even when we’re mad at each other!”

The two met at a bar, but coincidentally both worked under different iterations of the building. Bravissimo was an Italian restaurant that sat where Maxine’s does now. She was a hostess, he was a waiter. Her husband eventually became a General Manager of another restaurant. In a strange twist, his new owners purchased Bravissimo. Ten months later, they offered the restaurant to Kirt Earhart.

Fate stepped in when a group of lawyers happened to be dining at the space, reminiscing on Bravissimo. Kirt Earhart, who used to serve them, shared the offer. Interested in investing, they told him to craft a proposal for the space. Within minutes, the Earharts were looking at owning a restaurant.

“My husband calls and he’s like ‘Hey babe, guess what just happened’,” Maxine said. “He tells me the story and I’m like, ‘You’re kidding all in ten minutes?’ It sounds like the stars are aligning.”

The two drew together their dreams. They took influence from their 1940’s building, opting for a similarly styled space. She based the experience on three words: Sexy, Comfortable and Delicious. 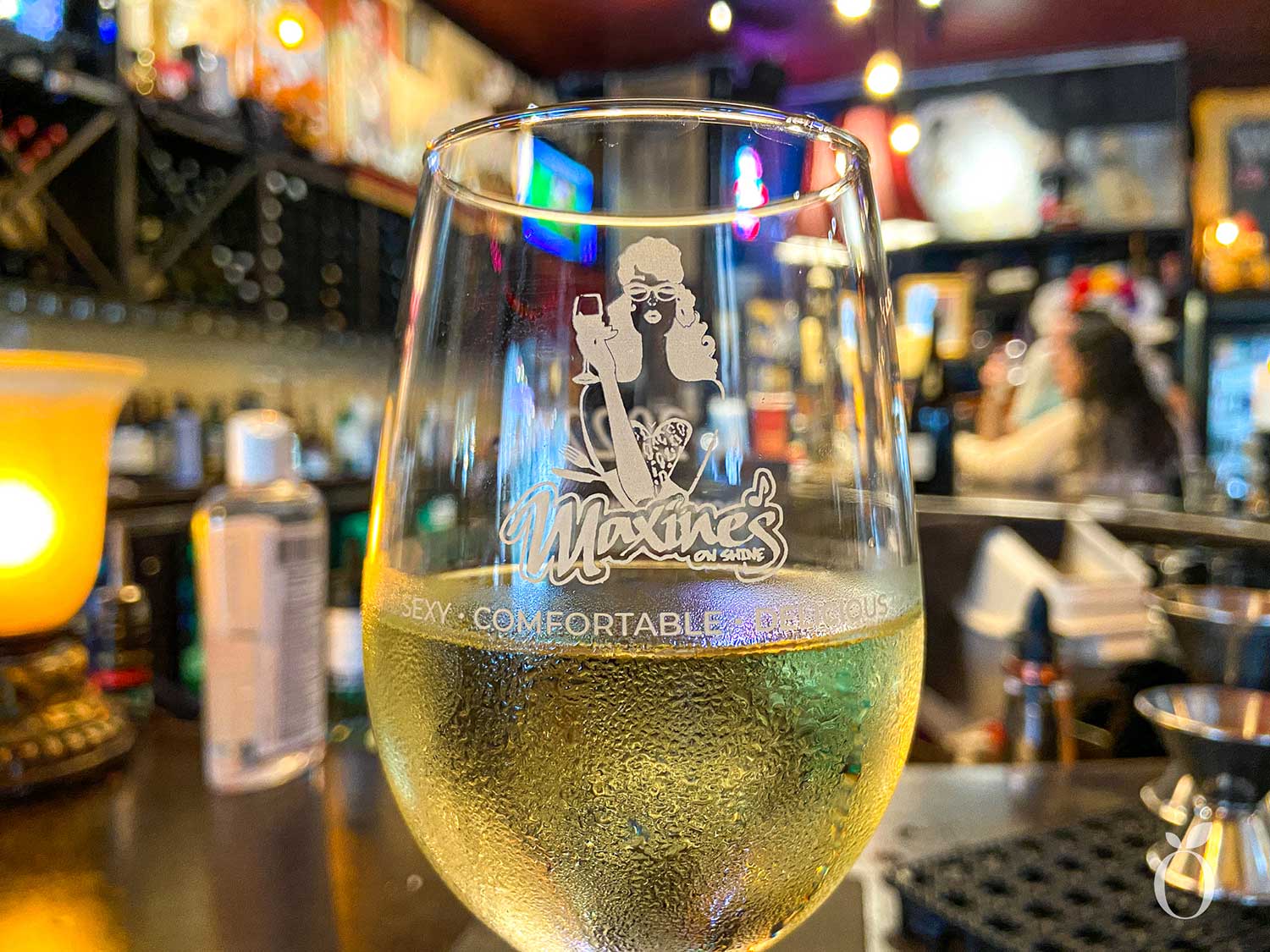 “I didn’t think I was going to work in the restaurant business,” said Maxine Earhart. “I was just going to basically decorate it.” She figured it was going to be her partner’s project.

He named the restaurant Maxines and she was shocked when the picture of the logo showed her iconic red glasses. She took this as her unofficial induction into the restaurant business. 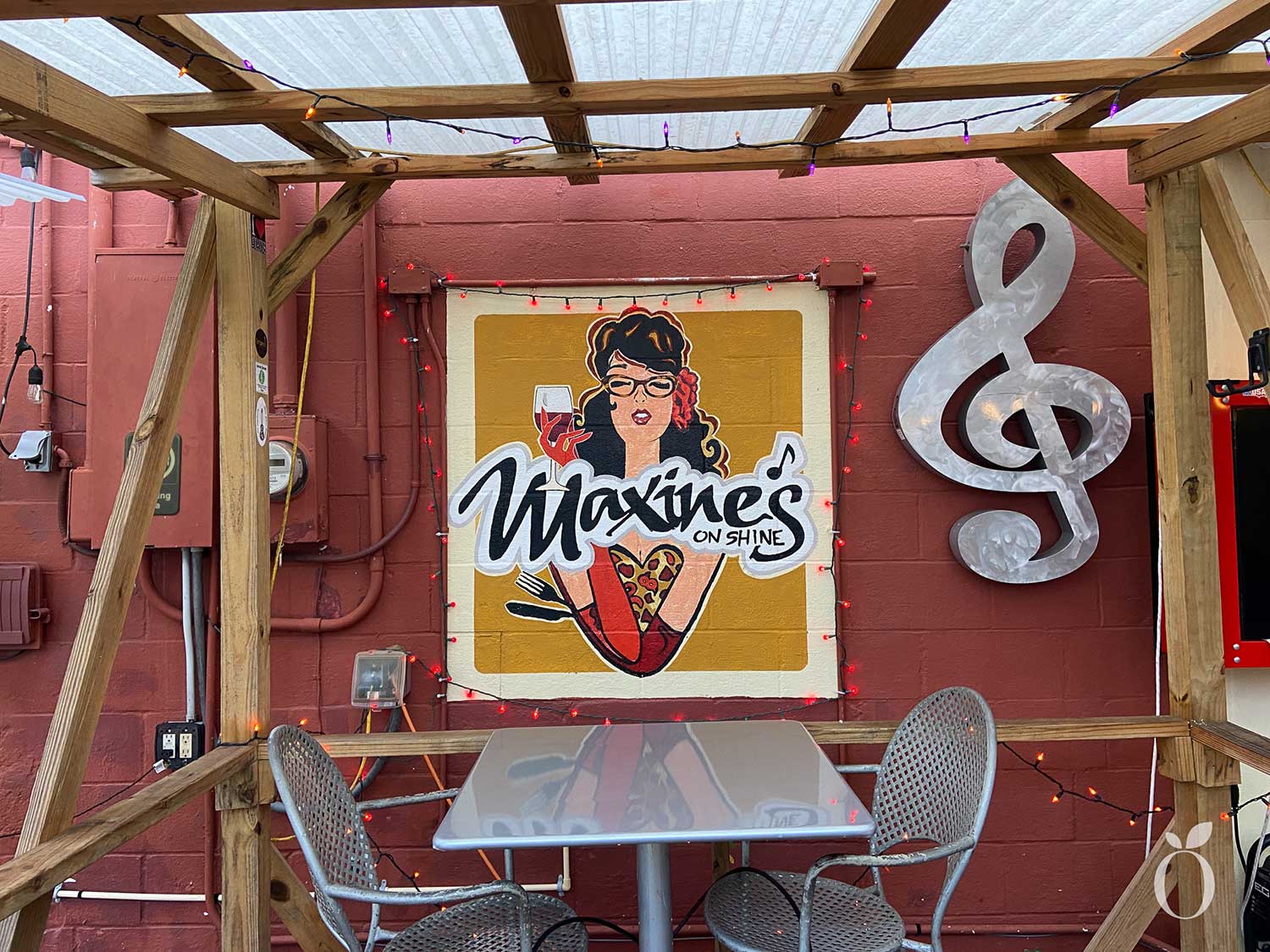 Maxine Earhart and her husband are front-of-house people, they’re entertainers. They finally found their back-of-house control with George Vogelbacher. Originally hired on as a dessert chef, the loss of their head chef saw the 81 year old step into the role.

Vogelbacher has a reputation for excellence. If there’s a rotten strawberry in a shipment, he demands a new bushell. If the purveyor has to make the choice between quality, Vogelbacher gets the best, which means Maxine’s always gets the highest quality food.

“We have made that a high priority in our restaurant,” said Maxine Earhart. “We don’t mess around with that, and I’m very proud of it.”

When the restaurant first opened, Maxine Earhart would visit ladies luncheons, art shows and charities, inviting people to visit. They would come, her husband would keep giving her a good product, and people enjoyed the restaurant.

With his wife visiting events, Kirt Earhart turned to radio; 96.9's The Game with Marc Daniels. The two talked sports while advertising Maxines as a paid segment for ten minutes every Friday.

“We kinda were guerrilla marketers, getting out there as much as we could and inviting people to the restaurant,” said Maxine Earhart. She explained how she targeted women, while her husband targeted men.

Even with the constant flow of guests, Maxine Earhart was horrified to find the restaurant not making money. Every cent was funneled back into the business, fixing machines, paying staff and buying new equipment.

“Every two weeks, my husband would say to me: ‘I hope it’s a good Sunday brunch, or we’re out of business,” she said. “I heard that sentence for five years. It made me sick to my stomach. We were working 80 hours a week and not making a profit.”

Another barrier was the restaurant’s lack of a liquor license. Liquor holds a large part of a restaurant's profit. One of Maxine Earhart’s proudest achievements is the work she did to expand liquor licenses.

When she first moved to the city, she noticed a lack of family-owned cafes. Reliance on restaurant dining rested in large chains that are found across the nation. At the time, she didn’t realize it was because of the state’s difficult liquor license acquisition. Florida liquor licenses used to be restricted to large restaurants by imposing a high minimum table count. This helped the evolution of “big box” chains across the state.

“We still were working 80 hours a week,” she said. “But we weren’t closing any longer.”

Aside from Maxine’s, the new law also helped many other downtown restaurants.

Present day, the restaurant prides itself on being a respectful neighbor. Sitting among residential houses in Colonialtown, Maxine Earhart doesn’t want anyone living near the restaurant to have any reason to complain.

After closing she sends her staff to clean the surrounding blocks from the guests. The abandoned Lime scooters are appropriately docked in her bike rack. Instead of stacking the furniture overnight, Maxine Earhart even preserves the “cafe look,” tying things down and leaving them in place. 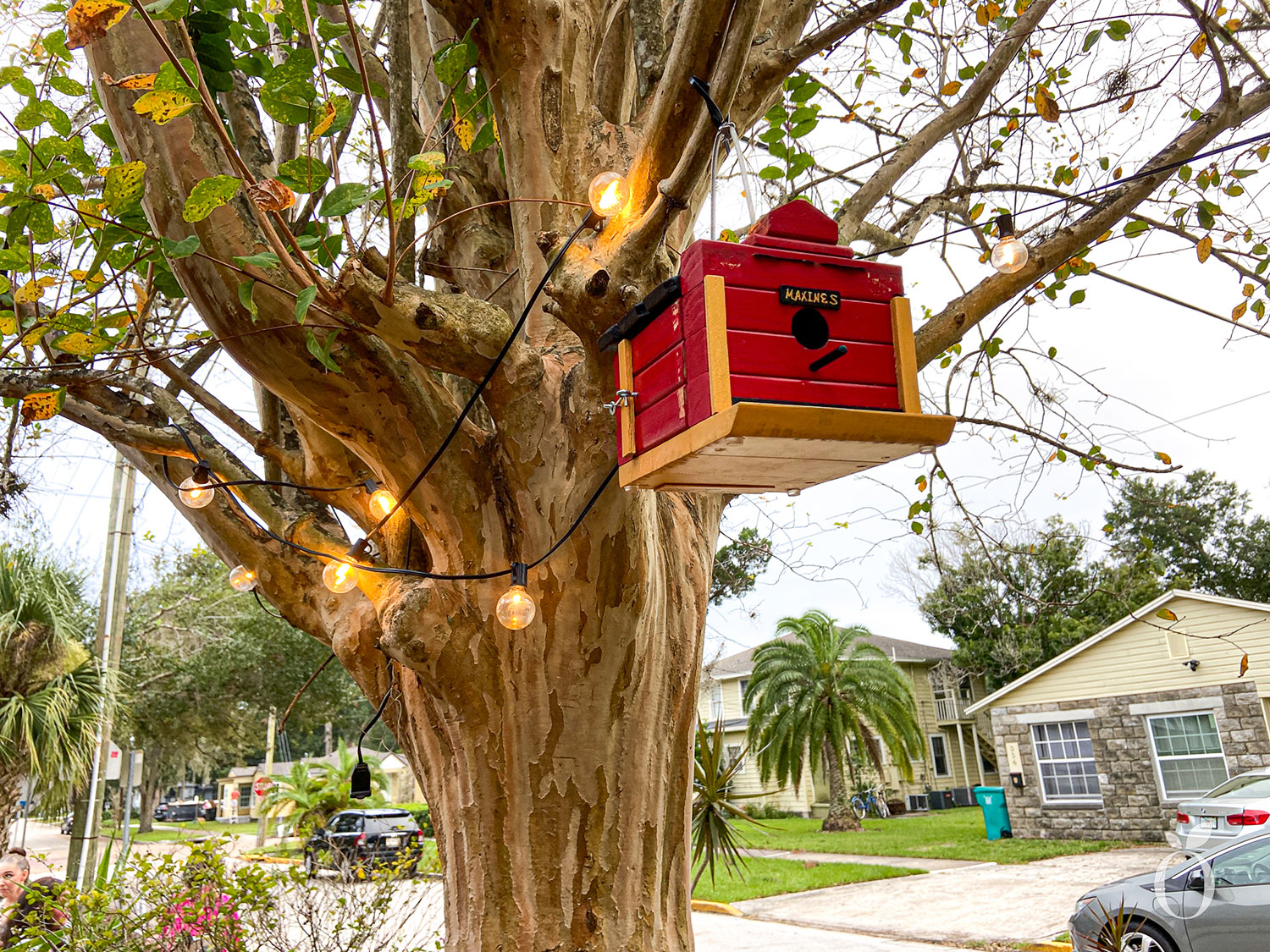 The restaurant just started outdoor dining during the pandemic. They converted their parking lot into little platforms. Future plans include an outdoor pavilion styled in a cutout of the original building, continuing the 1940’s look.

The space can only be described as eccentric. Nude mannequins composed of pages stand guard at the bar, one of which wears Maxine Earhart’s Miss New York State sash. The two can almost always be seen running around, cheering with guests and taking pictures with them. 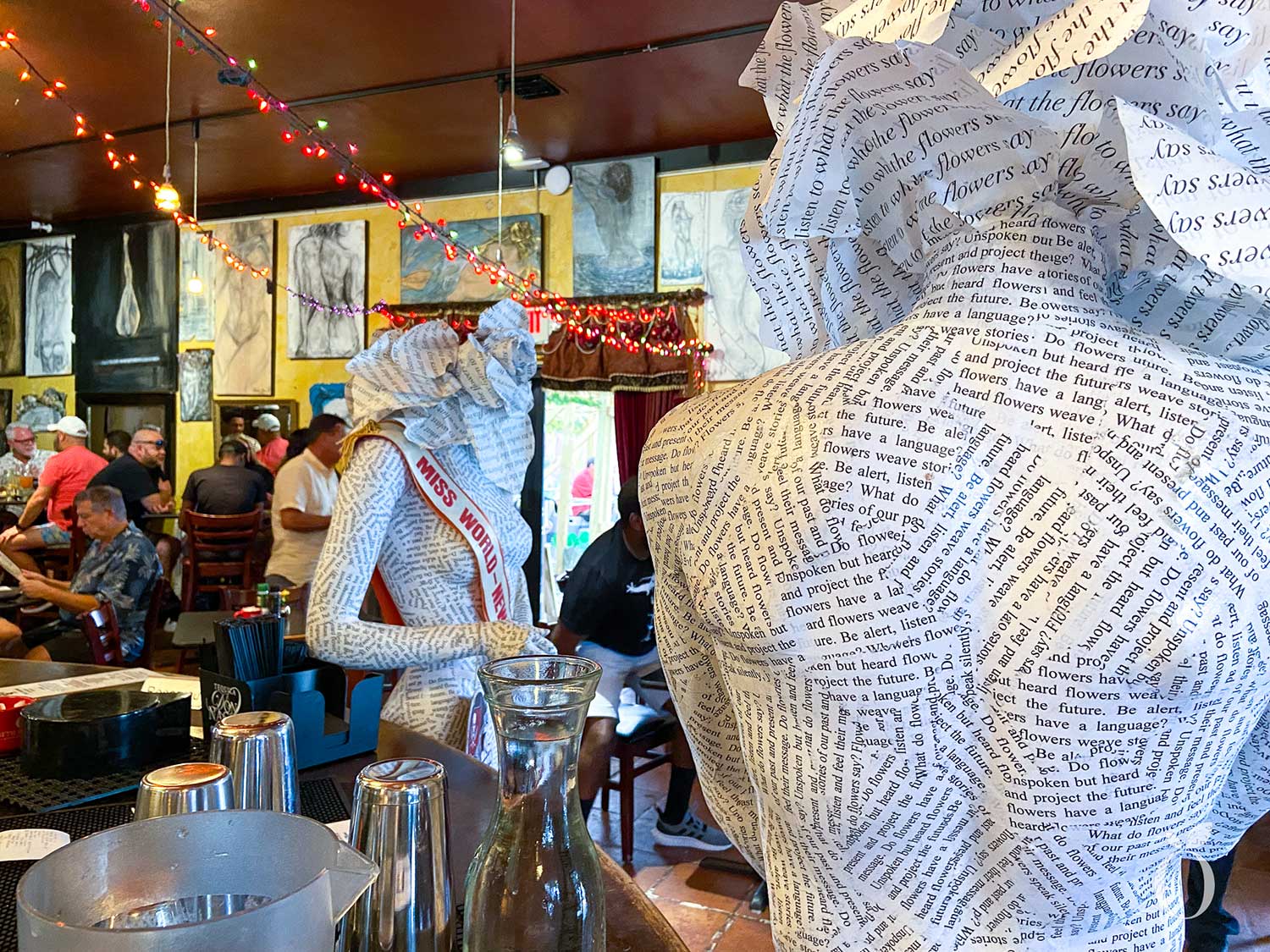 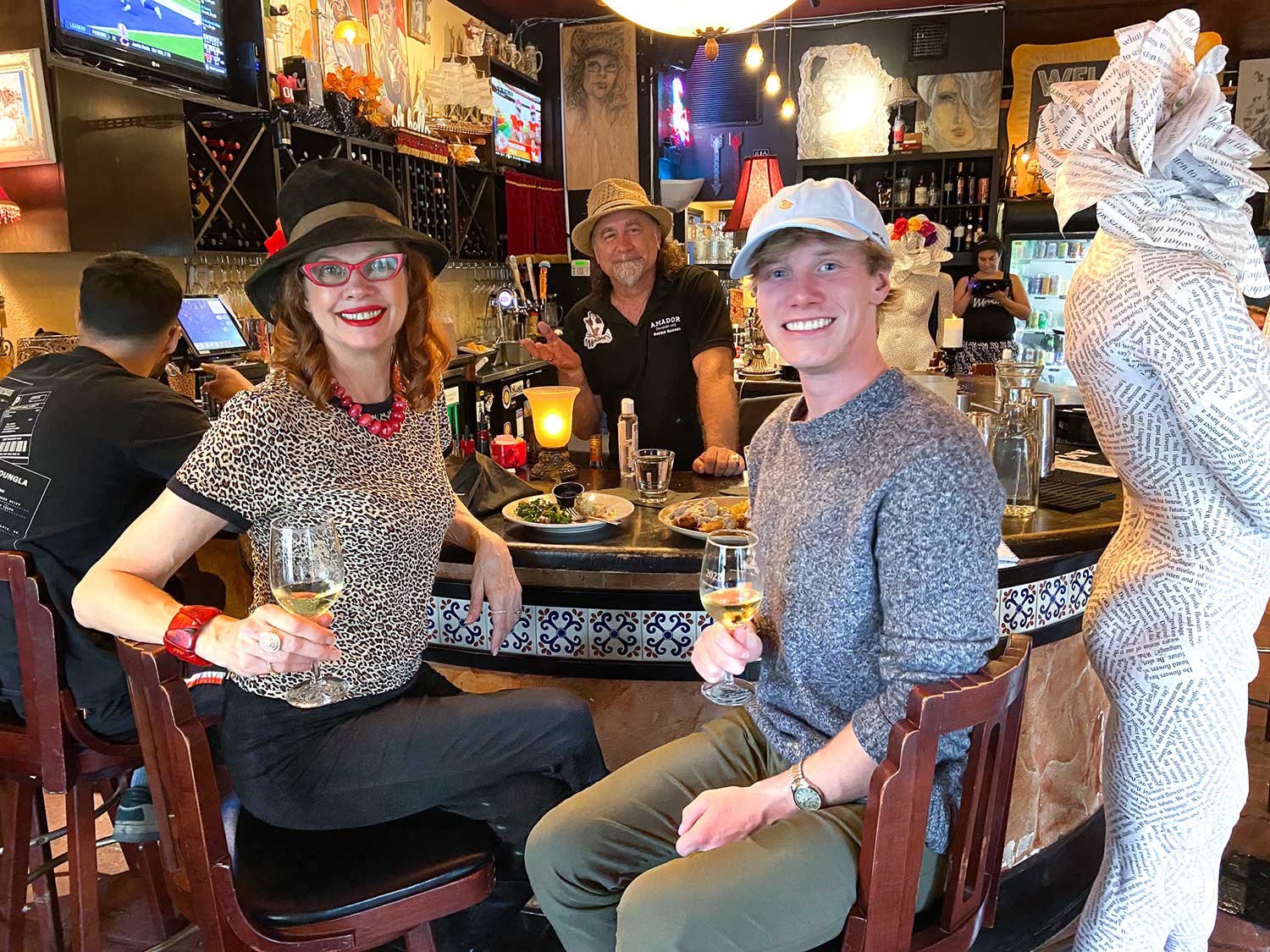 Maxine and Kirt Earhart pose for picture with Jonathan Taylor

Lucinda is the restaurant’s chief greeter. A poodle/golden mix, the dog has been trained to bark back to any “Hello Lucinda!” and shake guests' hands. She is the restaurant's youngest employee, starting at two months.

Before moving to Orlando, Maxine Earhart used to live in New York. She won Miss New York State in 1979, a pageant she entered to get her start in modeling. With her success, she modeled in the city from 1979-1986. She moved internationally for some time, working in Milan and Paris. Eventually, she started behind the camera.

“My career started dwindling, because, god forbid, I became old. I was over the age of 26!,” she said.

She moved to Florida in 1990, sick of the cold weather, and fell in love with the city. She got a job at Disney, working on the Mickey Mouse Club show. Eventually, she was a “spokesmodel” for Alfredo’s in Disney’s Epcot theme park. The position saw her as a face for the restaurant, handling complaints and greeting guests, something similar to what she does now at Maxine’s.

“You just never know that the job you have might be preparing you for something you’re going to do in your future,” she said.

Maxine loves Orlando. She likes walking around the manicured city. She loves the parks and thinks Orlando has done a great job curating them.

“I just think there’s a lot of pride in this city,” she said. “You walk around - look how beautiful everything is! People seem to really care about making their property look good. It’s a very attractive city.”

Maxine and her husband’s labor of love has found much success in the Orlando scene. It has been named onto the Michelin’s new 2022 Orlando Restaurant Guide, one of the highest honors a restaurant can achieve. It also was The Orlando Magazine’s Reader’s Choice Best Restaurant and Best Neighborhood Restaurant in 2022. 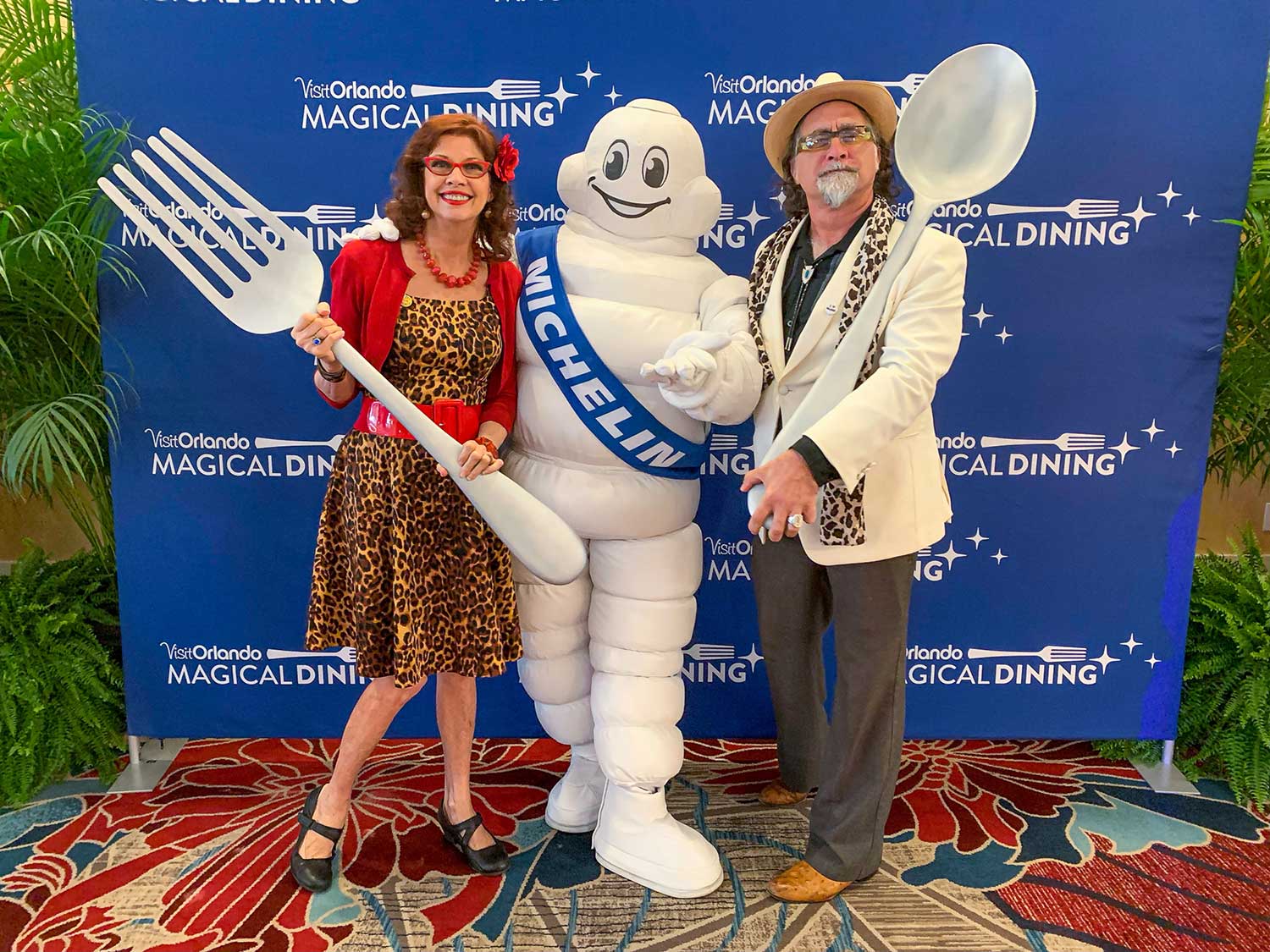 Maxine cites the incredible environment she has created on the two’s commitment to the restaurant. She has created a place that fosters community in Orlando. She loves photos, both Kirt and herself are almost always jumping in them, taking them or recommending a better backdrop for guests.

It is open 35 hours a week for dinner, and hosts a weekend brunch, regarded by many as being one of the best in the city. The two have been lauded as the “King and Queen of the Orlando Restaurant Business” by others in the industry.

Perhaps the sweetest declaration in the restaurant is a portrait of Maxine and Kirt Earhart, painted by artist Panther Brunotte, that hangs above the door. Watching over the space, it is a testament to their love and commitment both to each other, and to their restaurant. Maxine Earhart’s trust and Kirt Earhart’s passion have helped it become what many consider to be the best restaurant in Orlando. 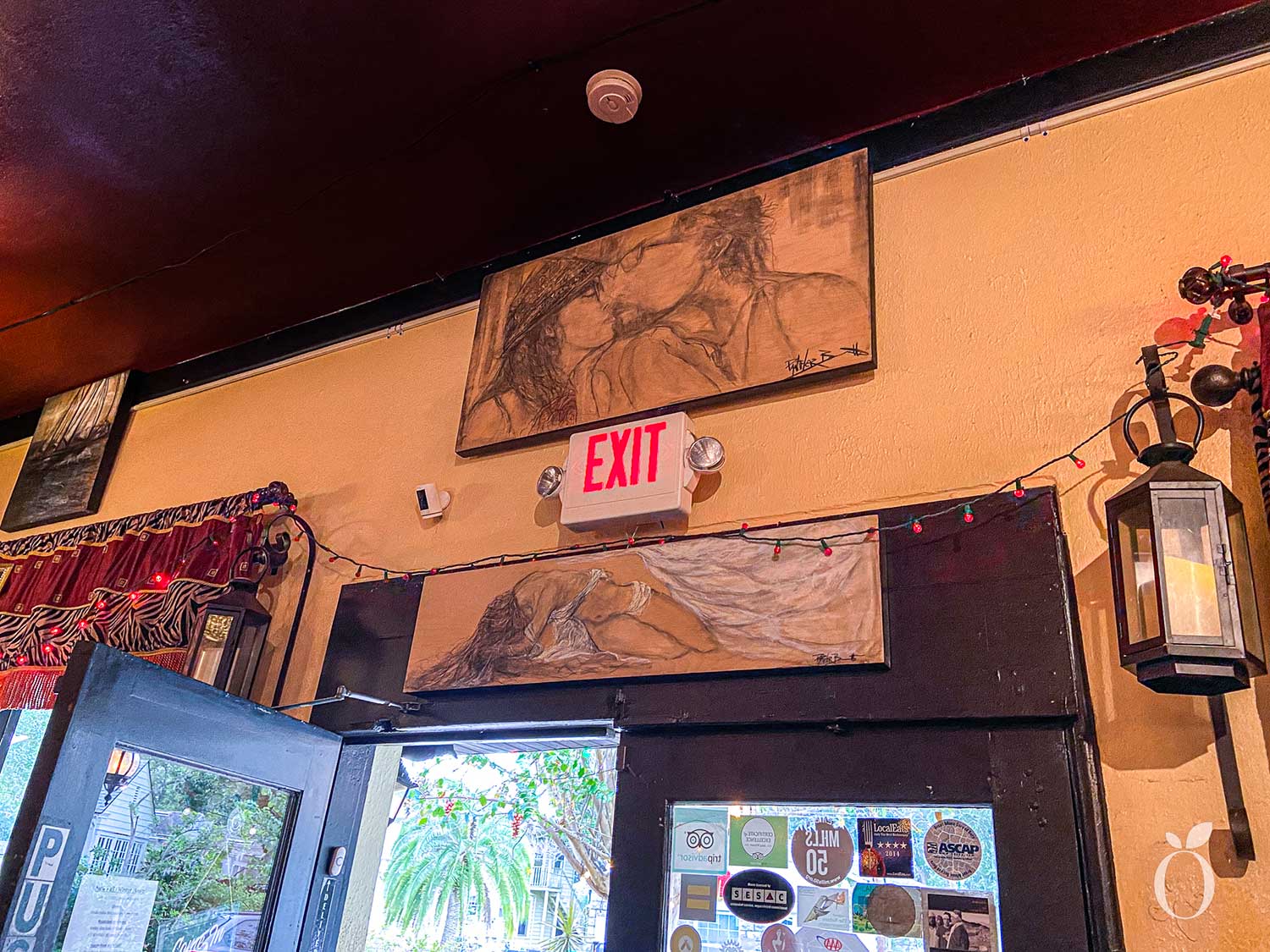 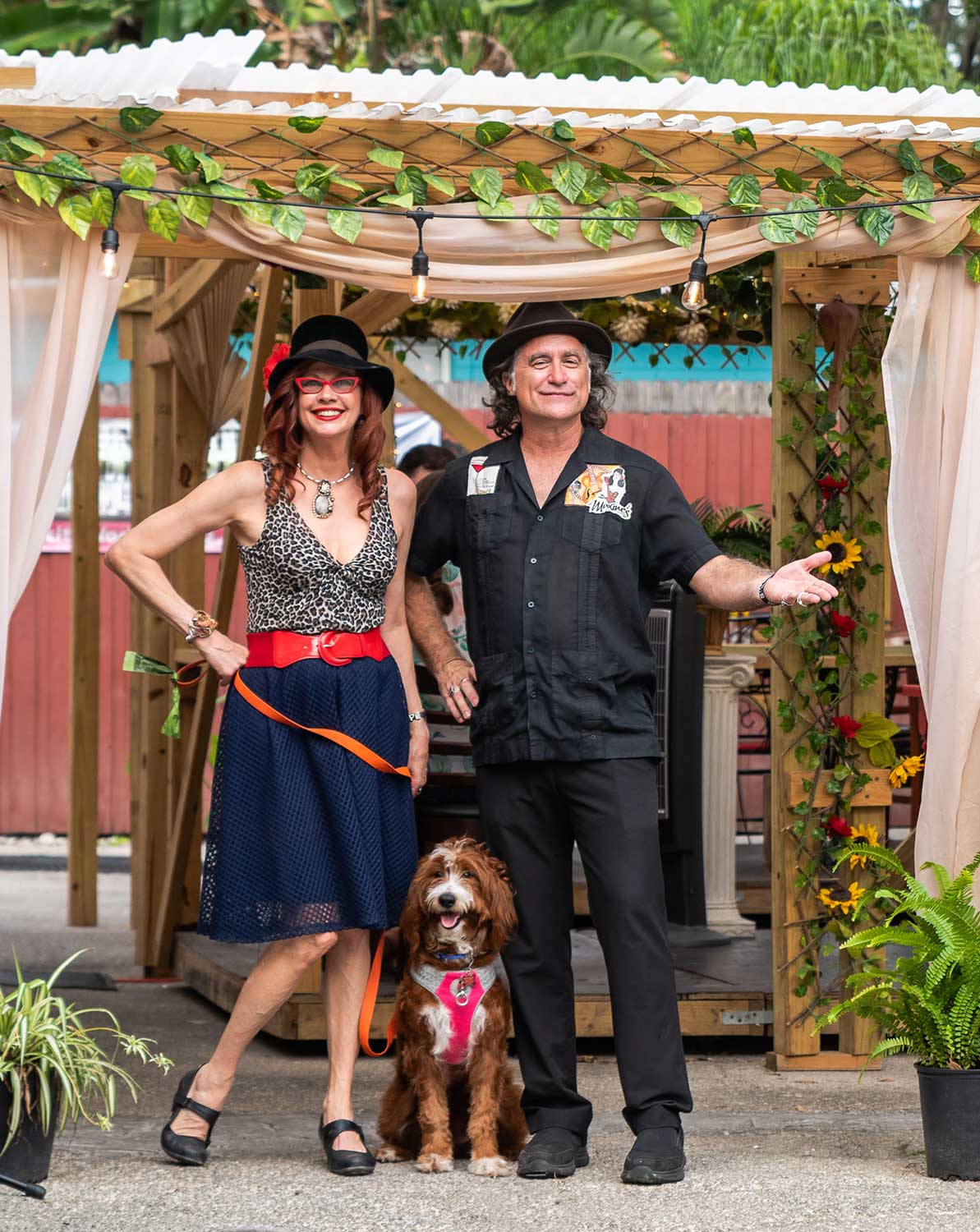 Connect with Maxine's on Shine

I am a senior at the University of Central Florida currently studying journalism and hospitality management. I love traveling, especially seeing new things and meeting new people. One of the most important lessons I’ve learned is that traveling doesn’t require a trek across the world. One thing I love about Orlando is the natural beauty surrounding the city. From the ocean, pine forests and swamps, this area is unlike anything else in the world! 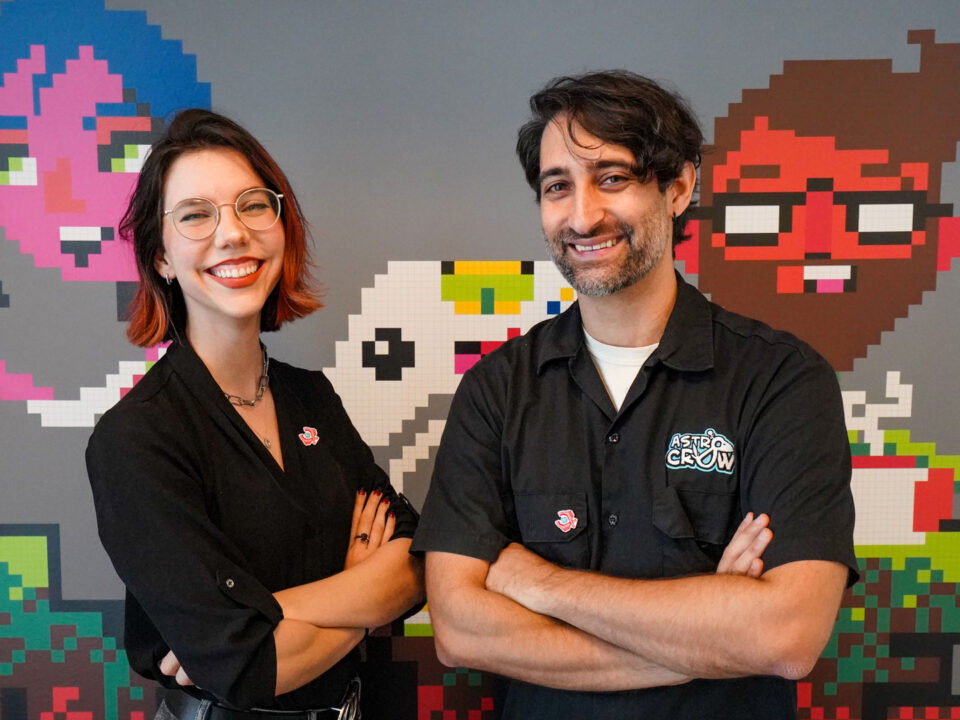