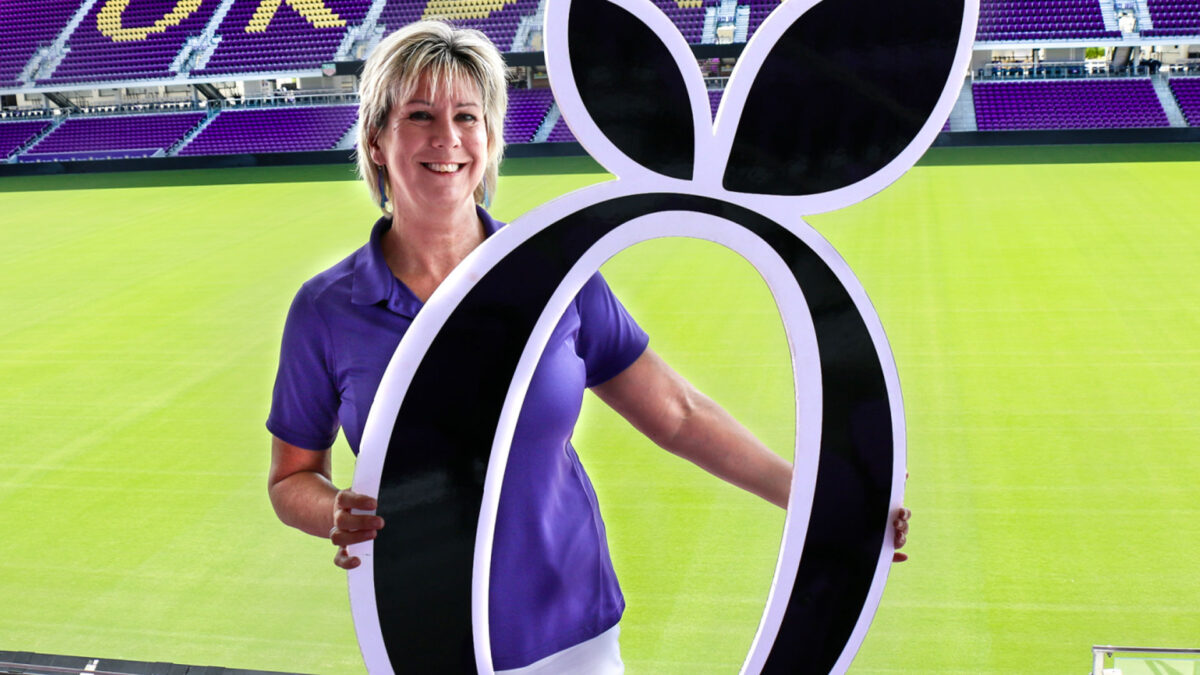 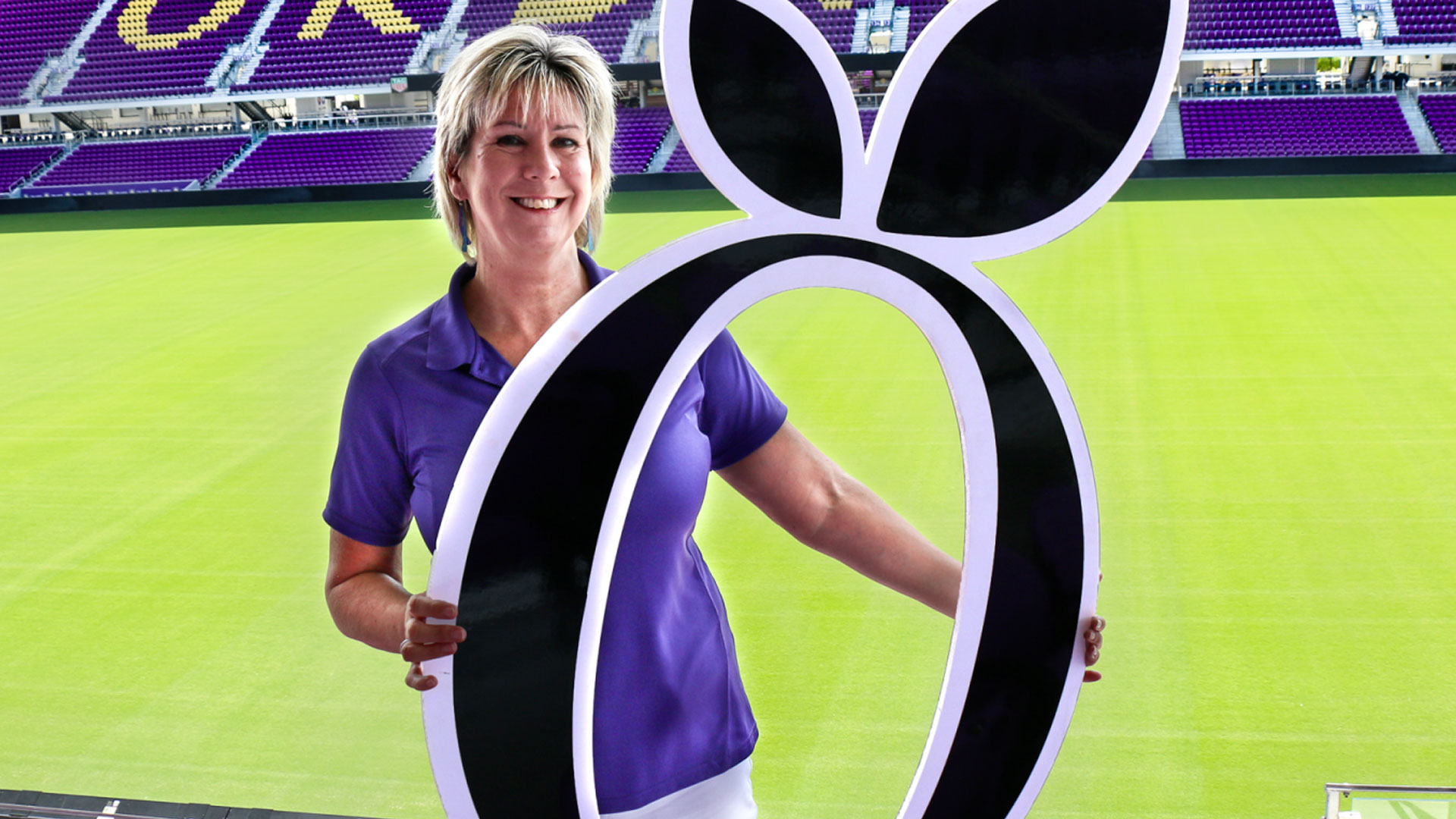 Kay Rawlins is Co-Founder of Orlando City Soccer Club and serves as the VP of Community Relations with the Club and as the President of the Orlando City Foundation. She grew up in a town called Stoke-on-Trent, in the UK and eventually found her way to the U.S. where she would end up bringing soccer to the City Beautiful.

While many will see Orlando City as an MLS soccer team, it is far more than that. It is a living, breathing community of soccer fans who also celebrate love, inclusiveness and life. Sitting down with Kay, it’s not difficult to see where the heart of that culture came from.

Leaving high school at 17, Kay decided to work at a bank where she would spend the next 10 years before becoming a stay-at-home mom. When her eldest was going into kindergarten and her youngest was 3, Kay decided to answer an ad in the newspaper to take a volunteer position for one morning a week at a local private preschool. It was here that she would meet one of her favorite mentors who would help shape her management skills and encourage her to attend college and obtain her qualifications to eventually run the preschool.

When Kay entered college, she was 31 years old with a focused and driven mindset. She not only went after her qualifications, she also took management courses and developed a strong interest in one of the childhood development modules. After learning about the widespread issues of child abuse, Kay made the decision to get involved. After achieving her qualifications, she would end up going back to the college and teaching courses to preschool teachers and those involved in nurseries on how to recognize the signs and symptoms of child abuse victims.

In 1994, under her mentor’s guide, Kay took over management of the preschool. Later, with the help of a business partner, she would become the next owner and go on to launch a second location due to the success of her methods.

Having been mentored by the previous owner, Kay picked up on the ability to value her staff. She made sure to spend time meeting with the staff and also creating fun opportunities outside of work to bond with everyone. One of the methods she used was called the ‘Positive Sandwich’ which she describes in the video below.

Moving to the U.S.

Around 2004, her then husband was living in Austin, TX working with the city to help find companies to invest in. Kay had made here way over to the U.S. but was unable to work because she didn’t have her Green Card. Not interested in the idea of doing nothing, she decided to volunteer at the Center for Child Protection, a group of agencies dedicated to reducing the trauma for children during the investigation and prosecution of crimes against children. She eventually ended up on the Board and remained there before moving to Orlando.

In 2008, she was involved in starting a soccer team in Austin. Working at it for 3 years, they held games in high school stadiums, developed a following of 2000-3000 fans, but couldn’t find a permanent home and the team was struggling to grow any further.

A soccer fan her entire life, she has been a season ticket holder to her hometown team, Stoke City FC. Soccer is king in Europe, and England alone has 92 professional teams. It just so happened that Stoke City was looking for an affiliate team in the U.S. and Kay had the opportunity to be a part of that process.

After much research, the decision to start a team came to the table. Literally, they sketched the plan on their kitchen table!

With Austin not being the right fit, they went back to the United Soccer League to get more optional cities to choose from.

Why They Chose to Launch a Soccer Team in Orlando

At the deepest core of Kay’s heart you will find love, compassion and inclusion – and it’s her spirit that lives very loud in the culture of Orlando City and its’ community. A defining moment as a tribe came when tragedy struck Orlando.

Coming Together as a Tribe

Building the Incredible Culture that is Orlando City Soccer

True to her nature, Kay bypassed the typical corporate formalities and kept her attention on the people of Orlando. When it came time to start shaping the character of the Orlando City Soccer brand, there was only one way to do it.

As a brand that is community driven, they are deeply involved specifically around the Paramore community, where the stadium is located. In the video below Kay talks about the importance of companies today having a social conscience and Orlando City’s efforts in that role.

The Importance of Leadership in the Community

Kay is the President and Founder of Orlando City Foundation, an organization that has taken on the challenge of child obesity, a problem she felt they were able to create a positive impact on. The program builds mini-pitches in urban areas, which are small, customized areas that are perfectly suited for organized soccer programs and pick-up games. The mini-pitches are (of course) purple, and the organization runs programs that are free for the children and include equipment.

During the programs they also teach nutrition. Due to the lack of access to fresh food, they decided to build their first community garden a few years ago in partnership with Fleet Farming. Taking it a step further, they created a farmers market at the stadium where the excess fresh fruits and vegetables from the garden are sold. In partnership with Orlando Health, they also made it possible for people in the community to use their SNAP dollars to purchase produce. 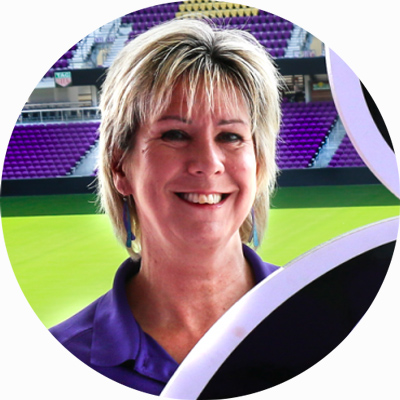